Warning: "continue" targeting switch is equivalent to "break". Did you mean to use "continue 2"? in C:\HostingSpaces\epdjbauy\wadokan-aikido.com\wwwroot\wp-includes\pomo\plural-forms.php on line 210
﻿ DAVID GALDAMEZ - Wadokan Aikido Dojo 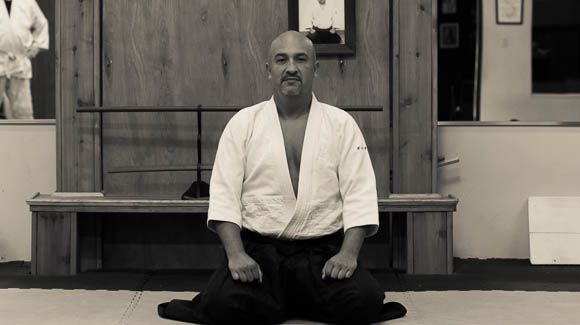 "The purpose of training is to tighten up the slack, toughen the body, and polish the spirit." -- O Sensei

Galdamez Sensei holds the rank of godan and is the head instructor and founder of Wadokan dojo. Galdamez Sensei began his Aikido training in 2000 under Michael Black Sensei in the Aikido Association of America organization. In 2004 he received his shodan (first degree black belt) from the chief instructor of Aikido Association of America Andrew Sato sensei. Shortly after the formation of the Aikido World Alliance, Galdamez sensei joined the AWA organization following his chief instructor. He received his nidan, sandan, yondan and godan (2nd, 3rd, 4th and 5th degree black belt) under Sato Sensei in the AWA. He has participated in international training in Japan, Qatar, Poland Bulgaria and has also assisted in the training of the police force in Qatar.